Image by Razorlovestones / CC BY

Straight razors that are sharp are more convenient to use for cutting and shaving. A single, sharp blade can cause little to no irritation and can help you work or move faster. However, like many other home tools and blades, they can gradually wear and become blunt. If you’re a barber, you may agree how blunt razors are harder to control and are more likely to slip; thus, making them riskier to use. Sharper blades then are a lot safer, as they are predictable.

Buying a new set of razors isn’t always the first necessary thing to do – there are plenty of ways to sharpen a blade. Two common choices, preferred by professionals, are sharpening via synthetic and natural sharpening stones. A natural stone could be the best bet, since they have been traditionally and historically used to produce fine edges on different blades. However, there are also testaments of how synthetic stones perform equally well. Still, various natural and synthetic stones may produce different effects, so it’s understandably difficult to find considerable options out there for the best sharpening stone for straight razors. But don’t worry, we’ve rounded up a thorough list of choices for you below. Here are our recommendations for best sharpening stone for razors:

Reviews of The Best Sharpening Stone for Straight Razors 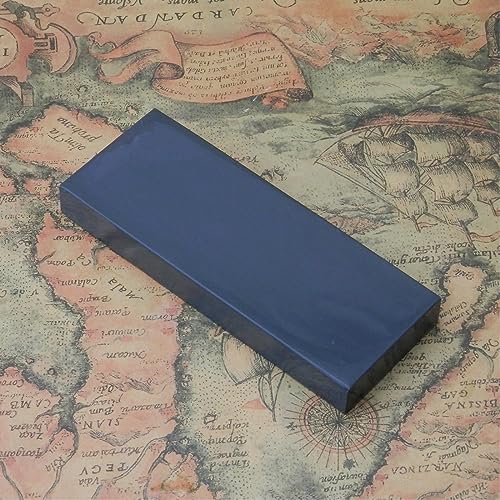 Water stones require reshaping after extensive use more than the other types, but they are far more excellent at giving feedback (the refined feel of the blade). A water stone is advantageous in terms of cleaning swarf, as it requires water rather than oil. Fast cutting is one of its strong points, though that alone wears the stone down much more rapidly; hence, the need to consistently reshape. On the other hand, synthetic stones are on a steady rise, so natural ones are trickier to find nowadays. If you’re more into natural, then this option could be a treat for you.

This Chinese water stone offers two smoothly polished sides of 3000 grit, an adequate number not just for straight razors, but for folding knives and fishing hooks as well. It weighs around 200 to 210 grams, making it a handy, compact choice if you’re looking for smaller stones. Medium grit stones have typical measurements of around 1000 to 1500 grit, so this stone’s 3000 grit may be more than capable at removing the material you need to restore your razor’s fine edge. 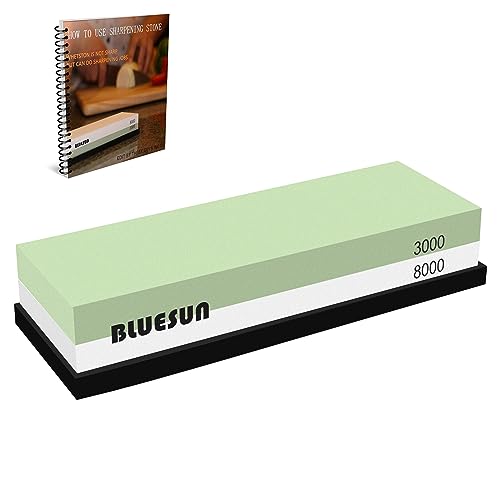 BLUESUN’s modern twist to the whetstone stands out in terms of grit. This stone offers two grit sides – one is a 3000 and the other is an 8000. It’s a great choice particularly for self-sharpening and is precisely consistent in hardness and particle distribution. The 3000-grit side is for the re-profiling cutting edges and refining dull or damaged gaps. The
8000-grit, on the other hand, is for burr removal, fine grinding, and straightening cutting edges.

This whetstone is most suited for “one-knife fans,” as it is made of high quality, natural corundum and can reduce the least amount of metal from the blade. It’s also said to be the stone sharpener that goes through a lengthy production process covering 17 stages and 3 inspection procedures.

The 3000-grit side can remove rough edges, and in the process of using it for sharpening, the blade is readied for finishing on the other side. If you want your razor to last longer than promised, then this whetstone might guarantee your money’s worth. 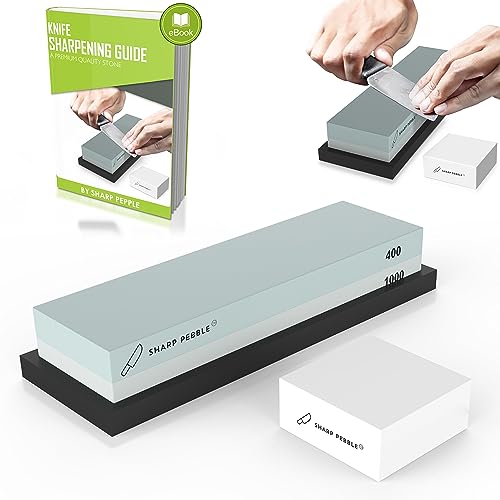 If you want something that handles more than just the straight razor-sharpening job, then this stone from Sharp Pebble might interest you. Designed with a non-slip, handcrafted rubber base for optimum safety and a 2-grit 400/1000 side for restoration and polishing, this whetstone goes as big as swords in getting the job done. It’s made from silicon carbide, a highly durable carborundum that can either be mined or synthetically produced.

It’s mainly used as a flattening stone. The grit sides make it highly suitable for repairing or restoring a variety of uneven, damaged, or dull edges. The whole package includes an eBook and Angle Guide for sharpening, which is great for beginners or for people who want to restore old, different blades. If you’re aiming to become proficient at sharpening in different angles, then you might want to invest your money and time on this stone. Pro tip: place a cloth underneath the base when you’re using the stone to protect your countertop from the grit. 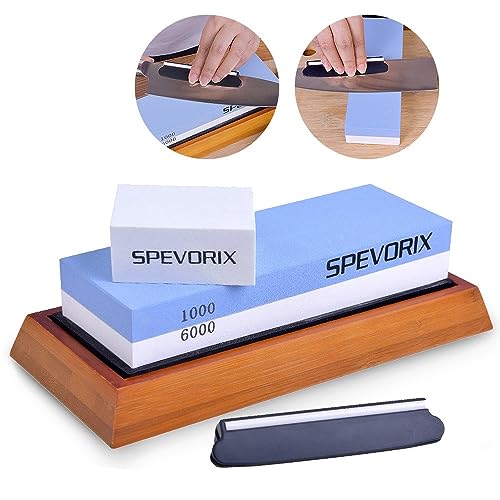 Perhaps the stone with the finest particle distribution on both grit sides, SPEVORIX offers this whetstone for premium sharpening. This means it’s primarily made for coarse and fine grinding.

Compared to the previous stones, the 1000-6000 grit sides are hinged more on finishing or polishing than full restoration. Well-balanced yet a bit hefty at 2.3 pounds, this stone is made of high grade white corundum exported from Japan. If you want your blades refined to flawlessness, then this option may appeal to you.

Sold as a set, SPEVORIX includes an extra fixer stone, which is intended for flattening the stone’s surface before sharpening. The stone’s base is a slip-resistant material made of silica, complemented by a bigger bamboo base for extra safety and security. A user guide booklet and an angle guide are included as well. Among the others in this list, this whetstone is more recommendable for new razor sets that might need a bit of maintenance in the long run. If you’re on a budget reserved for a package, then this could
be the best option for you.

Straight razors are among the easiest blades to sharpen since they’re smaller than most. Although a razor’s quality also varies, you don’t really have to look for a blade-specific stone or something that’s too expensive to buy.

Choosing the right sharpening stone then, falls on your answers to the following questions:

When you figure these out, it could be easier for you to decide. Note that grit matters most in a sharpening stone. Grit numbers that fall under 1000 are typically meant to restore chipped blades or ones that are unusually dull. If you have a very blunt blade, stones that have 1000 to 3000 in grit should be used. If you want to refine the sharpness,
anything that starts at 4000 and above is preferred.

A 2-sided stone is often the more money-smart choice, as it eliminates the need to buy two separate stones for two different purposes. If you’re on a budget, then this might sound like the preferable choice.

Also, if you’ve noticed, all the stones in this list are whetstones, meaning they only require water for cleaning and lubrication. Whetstones are a popular choice among users since they’re cheaper, they produce excellent and competent results, and are known to be more capable of lengthening a blade’s lifespan. Compared to electric sharpeners, they might take more time to use. But in long run, the electric sharpeners are more prone to creating more damage if they’re not used properly.

Though given the less demands in cleaning, there are tips to follow to ensure that the stones don’t wear down quickly. Stones that are at 3000 or higher are better not submerged to preserve their quality. Dampening the stones is preferred. For whetstones with grit numbers lower than 3000, they must be submerged 15 minutes before they should be used.

Among the stones in this list, Sharp Pebble’s 400/1000 grit sides are clearly more advantageous for long-term use. Think of it as “the best of both worlds,” meaning you could use the 400-grit side to repair chips and other unwarranted but inevitable damages, and the 1000 grit side is already a great starting number for refining.

It’s also the only whetstone to have one grit side lower than 1000.This feature is particularly useful for practice – honing your sharpening skills could prepare you for handling other sharpening stones in the future. Since it’s 2-sided, you can naturally save more money.

The other stones are still qualified to get sharpening done, so it’s all up to you to decide which one suits your needs the best. Good luck in choosing!

Can You Substitute Butter for Oil in Brownie Mix

Can You Freeze Feta Cheese Crumbles

Can you Put Glass in the Microwave